What Is The Cannabis Community Thankful For This Thanksgiving?

Are Psychedelics a Good Investment? What You Need to Know

Will These Marijuana Stocks Build Momentum After Reporting Earnings?


This story originally appeared on Zacks

At the end of the second quarter of 2022, GrowGeneration had cash and short-term marketable securities of $65.6 million. Inventory was $99.1 million, and prepaid inventory and other current assets were $9.2 million at the quarter-end. Total current liabilities, including accounts payable and accrued payroll and other liabilities, were $39.5 million at the quarter’s end.

GrowGeneration anticipates the ongoing revenue and gross profit headwinds to intensify in the back half of the year. Despite the weak demand faced by the industry currently, GRWG believes that the long-term prospect of hydroponics remains intact. Meanwhile, the company is working toward preserving cash through working capital optimization and aggressively right-sizing its cost structure.
GrowGeneration now expects revenues between $250 million and $275 million in 2022. The company had earlier provided guidance of $340 million to $400 million. Full-year adjusted EBITDA guidance is expected to come within a negative $12 million to $15 million, lowered from the prior range of $0 million to $10 million.
GRWG expects to open three to four stores this year, focused on areas where it does not currently have a presence. The company currently has 62 locations across 14 states. 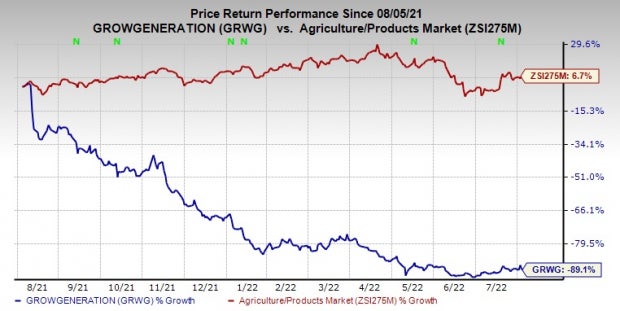 In the past year, GrowGeneration’s shares have slumped 89.1% against the industry’s rally of 6.7%.

GrowGeneration currently has a Zacks Rank #3 (Hold).
Some better-ranked stocks worth considering in the basic materials space include Cabot Corporation CBT, Sociedad Quimica y Minera de Chile S.A. SQM and Albemarle Corporation ALB.
Cabot, which currently sports a Zacks Rank #1 (Strong Buy), has an expected earnings growth rate of 22.5% for the current fiscal year. The Zacks Consensus Estimate for CBT’s earnings for the current fiscal has been revised 0.8% upward in the past 60 days. You can see the complete list of today’s Zacks #1 Rank stocks here.
Cabot’s earnings beat the Zacks Consensus Estimate in each of the trailing four quarters, the average surprise being 16.2%. CBT has gained around 37% over a year.

Sociedad has a projected earnings growth rate of 513.7% for the current year. The Zacks Consensus Estimate for SQM’s current-year earnings has been revised 57.8% upward in the past 60 days.

The metaverse is a quantum leap for the internet as we currently know it – and it will make some investors rich. Just like the internet, the metaverse is expected to transform how we live, work and play. Zacks has put together a new special report to help readers like you target big profits. The Metaverse – What is it? And How to Profit with These 5 Pioneering Stocks reveals specific stocks set to skyrocket as this emerging technology develops and expands.

Want the latest recommendations from Zacks Investment Research? Today, you can download 7 Best Stocks for the Next 30 Days. Click to get this free report

Next Jones Soda Wants to Shake Up the Cannabis Business

3 Marijuana Stocks To Watch As July Is Soon To Begin

Could CBD Use Help Slow the Growth of Cancerous Tumors?

Is Magic Mushroom Tourism the Next Big Thing?

Psychedelic drug lovers these days have an abundance of choices when it comes to various hallucinogenics. Serrgey75 | Shutterstock Magic mushrooms in particular are sprouting up like weeds, and it’s getting easier than ever to acquire them not just in the United States but around the world too, but what is psilocybin anyway? There are …

Cannabis Stocks To Watch Right Now? 4 Holding On To Gains This Month

Best Marijuana Stock For 2021 November has been an eventful month for the best marijuana stocks to watch. After the announcement that the GOP would introduce the States Reform Act, the cannabis sector began gaining momentum in the market. But in the last week of trading hold-ups with some of the legislation’s finer points have …

How Cannabis Has Changed The Workplace

With legalization spreading across the globe at a rapid pace, many are wondering how cannabis is changing the workplace. In the United States alone, 21 states have lifted the band on cannabis as many people use hemp for medical and recreational. But as this new wave of wellness and care continues to spread across the globe, it …

3 Marijuana Stocks To Buy Before Next Month?

Top Marijuana Stocks For Your 2022 Portfolio Currently, most marijuana stocks are seeing some pullback from Thursday’s close. However, this pullback could be a chance to find top marijuana stocks to buy. When a decline in trading occurs this is a chance to put yourself in a good position which can be one of several …